University of Copenhagen. Honing his skills for more than a decade with award-winning music videos and commercials, Michael gained notoriety for pushing the envelope on gore and good taste in music videos. Upon its release in 2010, his video for ”Ohrwurm” by Cephalic Carnage was set as the bar for what was acceptible as artistic nudity and bloodshed on Youtube – but the video was soon banned. His work for bands like Saint Vitus, Napalm Death and Job for a Cowboy are effectively short films in disguise and have been screened as such at festivals like Raindance, San Sebastian HAFFF and

Bogoshorts, some of them winning awards in the process.

After a brief flirt with animation and a concert documentary about Swedish band Nasum, Michael returned to fiction with the short film ’The Sunken Convent’ in 2016. ’The Sunken Convent’ has picked up a number of awards and screened at more than 60 film festivals including Clermont-Ferrand, Cucalorus and mayor genre festivals like Screamfest, Monster Fest, Imagine, L'etrange and Brussels Fantastic Film Festival.

Michael’s work is defined by a love for fleshy grotesqueries, hints of surrealism and a belief that

genuinely engaging stories – often with very little dialogue. In his work he fuses a love for extreme

cinema with traditional storytelling and engaging characters, creating works that set themselves 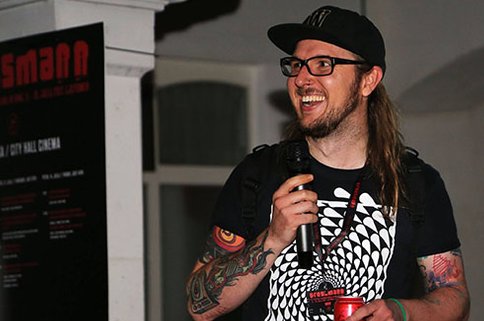 Filmland (48min in, in Danish)

ON NASUM: BLASTING SHIT TO BITS

Apart from his work as a filmmaker, Michael has done extensive work as a festival and cinema programmer in Copenhagen.

Aside from a stint at The Cinematheque at The Danish Film Institute, he has worked with festivals like CPH PIX, Copenhagen Short Film Festival, Blodig Weekend Horror Film Festival and VOID Int. Animation Festival (which he co-founded).

Organized a series of Clive Barker's films on 35mm and the first Danish exhibition of Mr. Barker's paintings